The DrupalCon Los Angeles extended sprints start this Saturday, May 9, and the main sprint day on Friday, May 15 is just a little over a week away. I'll be leading a Drupal 8 Critical Burndown sprint to help get D8 done, and kgoel and cilefen will be leading a sprint to triage Drupal 8 majors. And we need your help! Sign up for the sprints now, or read on for more information on what we'll be doing and why.

A release candidate for Drupal 8.0.x will be created once there are zero critical issues remaining. In the past six months, we've reduced the critical issue count from 130 issues then to just 29 issues as of today. This ongoing progress is thanks to the hard work of dozens of contributors. 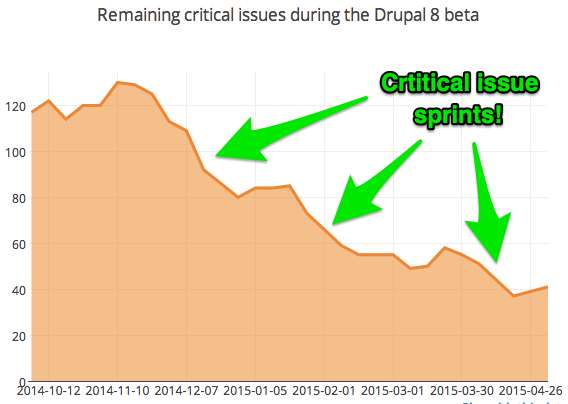 Over these six months, we've held three focused sprints on critical issues: in Ghent in December, Princeton in January, and Dev Days Montpellier in April. The impact of each of these sprints on the critical issue count was clear: a focused sprint is the best way to get a lot of work done efficiently. Help us with the next burst of momentum! Come to webchick's "Plain Drupal English" guide to the remaining Drupal 8 criticals, and sign up for the Los Angeles critical issue sprint.

900 reasons to get involved

The criteria for critical issues are very specific: the issue needs to be serious enough that we're not going to support Drupal 8 for any of the hundreds of thousands of sites that run Drupal without it. However, they're not the only issues we need to solve. Like most beta software, Drupal 8 still has plenty of bugs that need to be fixed, but that aren't severe enough to block release. Among these are the major issues, which are not a critical problem for every site, but still nasty enough to ruin someone's day.

The Drupal 8 core committer team systematically evaluates every single critical issue to make sure it's relevant and that it really should block release, but we don't have the resources to do this for major issues. Over the four years of Drupal 8's development, we've racked up nearly 900 major issues that are still outstanding. Many of these issues are still relevant and important to make Drupal 8.0.x more robust. However, many others are outdated; they might already have been resolved, they might no longer be relevant, or they might be candidates to postpone until 8.1.x or 9.x instead because they're no longer acceptable during the Drupal 8 beta.

This is where you come in! If you don't really see yourself helping with those 29 criticals, but you do have some experience with Drupal 8 and with core contribution in general, help us sort through these majors during DrupalCon LA. Take a look at the draft instructions for the sprint, and if you're up for it, put your name down for the major triage sprint in our sprint sign up sheet.

Like I mentioned above, a lot of the major issues in the queue probably aren't relevant anymore, and fixing the rest is going to make Drupal 8 better. There's another reason to sort through them though: there might actually be some critical issues hiding in that queue. The average critical issue takes between 1 and 4 weeks to fix once it's marked critical. However, a third of critical issues start at some other priority before their significance is recognized. This is actually a big challenge for Drupal 8 release management: we can organize resources for the criticals we know about, but not for ones we don't. So not only does helping move majors along make Drupal 8 better, it might also get it ready faster.

Recently, Dries posted a new proposal on Drupal core's structure, responsibilities, and decision-making, which definitively established the role and responsibilities for core subsystem maintainers. We have lots of "vacancies" to fill. :) And it just so happens that triaging major issues for a particular component is a chance to learn a lot about that specific topic area and maybe to find your niche in Drupal core. We'll be organizing the major triage sprint into teams by subsystem so that each team has the chance to focus and build some expertise over the course of the sprint. Contributing to one patch will build your technical skills; contributing to the "big picture" through triage will build your understanding at a higher level. Participating in the major triage sprint is one way to explore what it would be like to be a subsystem maintainer -- and, as the Docker community has put it, maintainers are what distinguish a good project from a great one.

If you're just getting started with Drupal 8 or with core contribution, there's still a spot for you on the Friday sprint day! Join the Mentored Core Sprint.